Is There An MS Personality?

Are there behaviors, attitudes, and ways of being common to those diagnosed with multiple sclerosis?

For example – where you motivated to do things right, to make others happy, and to not be too emotional for fear of upsetting your parent? These motivators would influence how you behaved in childhood and how you behave today.

And this personality becomes stable, these motivators and behaviors we are not longer aware that we do them.  Just like driving a car. Once you’ve learned and done it enough times, it can become habitual, and you drive without much of an awareness that you are doing it. Similarly, we learn these patterns of behaving, and they become unconscious, out of our awareness, and our automatic response to life.  Even though it becomes habitual, it is not your identity. These are adaptations to childhood situations and stressors.

“Adaptations that help you survive the immediate stress in childhood become sources of pathology later on.  They are unconscious.  No one chooses to behave in these ways.”  Gabor Mate “When the Body Says No”

Unless you get a wake-up call of some sort to modify these adaptations, such as multiple sclerosis, you’ll continue to respond to work, relationships, yourself, and most everyday situations in the same way.

How is the Multiple Sclerosis Personality Formed in Childhood?

Interestingly enough, the personality traits that helped you cope with childhood situations and traits  that were admired and encouraged in childhood are the ones that later become multiple sclerosis. What!? Let’s look at the traits most common to the MS Personality to understand how these admired and encouraged traits become a problem later in life. 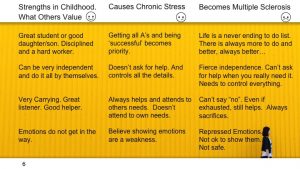 “Much of what we call personality is not a fixed set of traits, only coping mechanism a person acquired in childhood.” – Gabor Mate

By looking at the chart above or the video, you can see some of the examples of how some of the multiple sclerosis personality traits are developed.  Strengths in childhood become unsustainable behaviors and beliefs in adulthood.

Traits such as being a good student, the favorite daughter or the hard worker or athlete become, as it continues to motivate us in adulthood, a never-ending strive for success, overachievement, pushing, and doing everything right.

In childhood, there are only a few things to focus on and push through, but in adulthood, this strategy become unsustainable.  There just isn’t enough energy or hours in the day to do it all right, successful, and better than everyone else.

All that mixed in with the common trait of carrying for the happiness of others and an inability to say “no” even when we are exhausted.  All this mixed in with the trait of sucking it up, not showing your emotions, and never asking for help.

We need to develop the resources to create balance and prioritize where this trait is healthy and where it leads to burnout and exhaustion.

Creating Balance of the Multiple Sclerosis Personality through NLP

“Every behavior is useful in some context.”

“Behind every behavior is a positive intention.”

By understanding the positive intention behind the behavior and when it’s useful, we can begin to understand healthier ways to achieve that intention.

Additionally, symptoms of MS are not, according to NLP presuppositions, ‘failure of the immune system.’

“There is no such thing as failure, just feedback”

“Symptoms are a communication about needed action.”

Working through the MS Personality to Heal Multiple Sclerosis

One way to begin the work is by changing the beliefs that have supported being this way from childhood.  NLP, along with hypnotherapy and Brain Gym, are methods to make those kinds of deep childhood modifications.

Neurolinguistic programming( NLP), for example, can help create the balance of these behaviors that turned into extreme personality traits.  In NLP, these behaviors are never judged or deemed ‘wrong.’ Instead, there is a curiosity about what created this behavior and kept it in place so many years.

NLP also considered symptoms as feedback.  The body is saying ‘this way of behaving is not sustainable.’  It is requesting action.  Once the action behind the symptom is taken, the symptom is no longer necessary and can reduce or even disappear.

As these coping personality traits change into healthier patterns, the body is relieved of its burnout and can begin to heal. 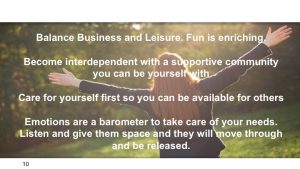 “Your MS personality is not who you truly are; it’s who you learned you had to be.” – Eva M Clark

Are You Ready to Take the MS Personality Quiz?

Please log in again. The login page will open in a new tab. After logging in you can close it and return to this page.