Does EBV cause MS? (video)

Can a Virus Cause MS?

In early 2022, a longitudinal study looked at the relationship between EBV and multiple sclerosis. Since the study was published, many articles have popped up asking, “Does EBV cause MS?” We will review the data and use two medical lenses to answer this question.

The longitudinal analysis evaluated data from 10 million active-duty personnel. It compares 955 soldiers diagnosed with MS to a similar sample of soldiers who were not diagnosed with MS. The two groups were then evaluated for EBV. According to the study:

94.7% of the military personnel were EBV positive when first enlisted. 5.3% that did not have the virus at the start. Of that small group, 57% later got EBV and not MS and 97% got both. The average time between getting the virus and getting MS was five years.  There was one case of MS that did not get EBV.

So, reviewing these figures, can we assume that EBV caused MS? Well, it depends on how we compare the numbers and the medical theory we use to understand how viruses effect us.

The Primary Medical Views regarding Viruses and Illness

There are two primary medical views to understand the relationship between viruses and disease are germ and terrain theory. These two theories were developed in the mid-1800s with the evolution of the microscope. The main difference between these theories is that in germ theory, we assume germs, viruses, and microbes invade the body and make us sick.  We need to avoid them where ever possible. In contrast, in terrain theory, these organisms are already in the body and help our cells in certain vital functions. They only contribute to illness when the body’s cells are already ill.

The process of getting infected by a virus and ill as a result is also significantly different.

The Process of Getting Infected and Ill 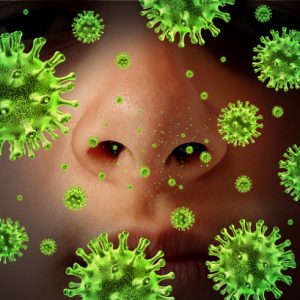 In germ theory, a virus enters the body through the mouth, respiratory tract, eyes, genitals, and broken skin. These viruses can be active and cause harm or be dormant and not cause damage for a period of time. It is not clear why some people have no symptoms or why, in many cases, viruses can remain dormant for years.

In the case of terrain theory, the majority of viruses already live in your bodies and collaborate with your cells. We collect them from the day we were conceived until the day we die. In our mothers’ womb, the birth canal, during lactation, licking toys and eating dirt, our first kiss, and sexual activity. We don’t become ill because of the viruses, even with the common cold, unless our cells have become unhealthy. When your cells become unhealthy due to physical, social, and mental overload, viruses become harmful.

What is the Relationship – Does EBV Cause MS?

Thus using germ theory, you usually catch EBV as a child or early adult. The virus does not affect the majority of the population. It is considered ‘dormant’. In the case of MS, EBV is thought to become activated after a few years. As there is one case of MS in the study that never got EBV, we can say it can be a factor in MS but it does not the cause.

Under the terrain theory, these stressors build and cause the cells of the nervous system to become unhealthy. The body’s viruses, microbiome, and the immune system move into the unhealthy areas and attempt to eliminate the unhealthy cells (their job). This theory can also explain what causes exacerbations – additional strains and stressors that further overburden the body’s cells.

A third theory, the germ-terrain duality theory, combines both lenses. Under this theory, the interest is in sustaining both a healthy internal and external environment. This combined theory can better explain the relationship between EBV and MS:

Thus, in combination we see that it is not just a virus or toxins in our food that cause multiple sclerosis but the overload of both these external loads as well as the internal stressors.  Looking at the theories combined, it is clearer why there is an extended period of time between getting EBV and getting MS. EBV doesn’t trigger MS, but it can be contributing to the stressors already taxing your immune system.  The theories together also explain why the virus causes no symptoms in most people and severe symptoms in others. If the body is not already overloaded, the immune system can manage the virus easily. If the body has been overloaded for some time, EBV causes additional stress. The, perhaps months or years later, an additional stressor either external or internal, pushes the immune system over the edge and it flares up. This can explain MS exacerbations.

Though you might have already begun to address the external overload by detoxing, enriching your nutrient intake, and moving the body more, have you considered what you might be able to do to change the internal environment?

Interestingly enough, those diagnosed with MS have similar internal stressors. That is similar beliefs, behaviors, and childhood experiences that contribute to the internal overload.  I call these the MS Personality.  Want to learn more?

Please log in again. The login page will open in a new tab. After logging in you can close it and return to this page.